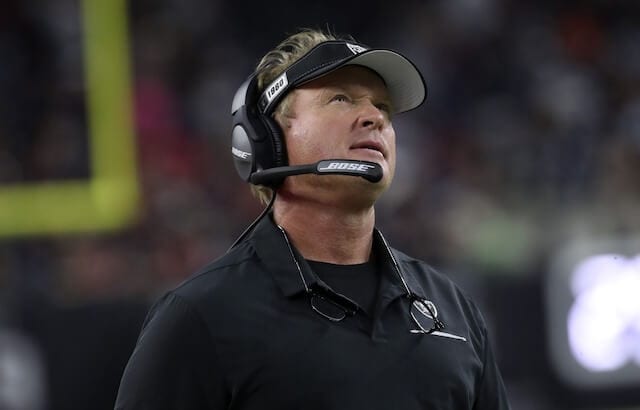 For the first time in a while, the Las Vegas Raiders have high expectations going into a season after an offseason in which they made significant additions on both sides of the ball.

The Raiders were one of the surprise teams in 2019, playing much better than people expected, although they still finished 7-9 and missed the postseason for the third consecutive season.

While the Raiders played teams tough, there were a ton of winnable games that they were not able to come out on top in. A big reason for that was their lack of ability to finish drives and get the ball into the endzone as they ranked 22nd in the league in red-zone touchdown percentage (52.8).

In his first press conference ahead of the start of training camp, Raiders head coach Jon Gruden pointed to that as one thing he and the team need to improve on in 2020, via Tashan Reed of The Athletic:

“Staying healthy and the emergence of some of these second-year players and rookies will help us,” Gruden said. “Again, we got to create some turnovers on defense, we got to eliminate the penalties and we got to close out a drive inside the 1. Those are some things I’ve already talked about.

“I gotta coach better; ain’t no doubt about that.”

The Raiders had no problem getting the ball down the field, even often getting it to the one-yard line before being stood up and forced to kick a field goal or failing on fourth down and turning it over. According to Gruden, that can’t happen in 2020 if they want to get back to the postseason:

“We stunk last year — I stunk — inside the 1-yard line,” Gruden said. “We got stuffed too many times down inside the 2-yard line. That’s all my fault. We got to address our tight goal-line offense to be a good scoring team.”

The Raiders added some much-needed weapons on offense this offseason by drafting Henry Ruggs III, Bryan Edwards and Lynn Bowden while also signing veterans like Nelson Agholor and Jason Witten.

That should help Gruden be able to get more creative in the red zone as Derek Carr now has plenty of options to throw to in addition to the threat of Josh Jacobs or Alex Ingold running the ball.

The post Jon Gruden Believes He Needs To ‘Coach Better’ For Raiders To Improve In 2020 appeared first on Raiders Newswire.