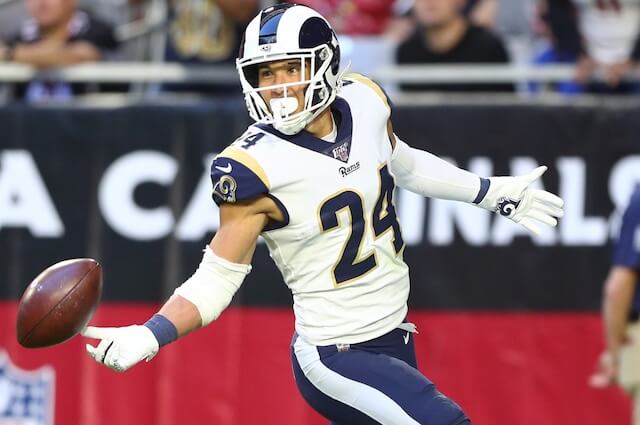 The Los Angeles Rams found the other half of their safety tandem in Taylor Rapp during the 2019 NFL season.

Rapp’s emergence has undoubtedly earned him the starting job alongside safety John Johnson III heading into 2020. The former second-round pick in the 2019 NFL Draft was able to provide an immediate impact as an integral piece of the Rams defense during his rookie year.

Of course, expectations are now as high as ever heading into the 2020 NFL season. Although he has not logged in much playing time with Johnson, it appears he is already well aware of what he brings to the table.

Rapp offered up some high praise for Johnson’s skillset and work ethic, via Sarina Morales of the team’s official website:

“JJ is such a good player and he really doesn’t get the praise or respect he deserves, but just expect a big year from him this year. He’s been working and rehabbing every day and he’s itching to get back more than ever. He’s a very versatile player. I think he can do everything a coach can ask a Safety to do on a defense. He can play deep, he can match up any tight end, he can drop down, he can play in the box, he can play linebacker, he can really do everything.”

Like Rapp, Johnson had established himself as quite the steal after being taken in the third round of the 2017 NFL Draft. He became an immediate starter and was even poised for a breakout year heading into the 2019 campaign until it was cut short by a shoulder injury.

While Johnson was not able to develop his on-field rapport with Rapp during the season, the two still seemingly managed to hit it off throughout the course of the year. Their chemistry could help to pay huge dividends for the Rams defense as they look to bounce back at SoFi Stadium this season.

Los Angeles put an emphasis on players that boast versatile skillsets and it clearly has not gone unnoticed given many of the compliments Rapp gave Johnson can also be said about him. Having a few interchangeable parts over the top could make developing a new scheme much easier for first-year defensive coordinator Brandon Staley.

The Rams suffered some heavy losses in the linebacker corps with the departure of Cory Littleton, Dante Fowler Jr. and Clay Matthews this offseason. The onus will fall on the defensive line and secondary to help pick up the slack for their replacements.