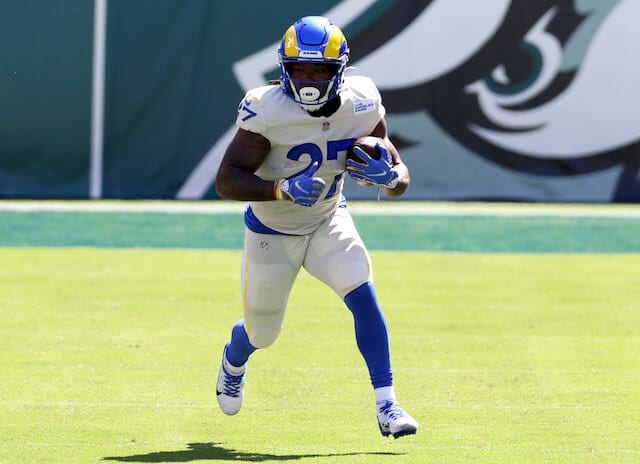 Los Angeles Rams running back Darrell Henderson has thrived in his workhorse duties over the last two weeks amid the injury to Cam Akers.

Henderson is coming off back-to-back weeks where he managed to register over 100 yards from scrimmage and a touchdown. The 114 yards on 20 carries against a stingy Buffalo Bills’ defense that was only giving up the third-fewest rushing yards per game (75.5) at the time is evidence of what the increased workload has done for his play.

Although head coach Sean McVay had initially planned to stick with a committee in the backfield, Henderson’s recent performance indicates that it could soon be a one-man show. For now, he will begin by making him the starter with Akers expected to miss their Week 4 title versus the New York Giants, per ESPN’s Lindsay Thiry:

Rams coach Sean McVay said Monday, “I think so,” when asked if RB Darrell Henderson will start Sunday vs. the Giants based on his performance the last two games. “He’s doing things that, not surprised, but very pleased. He’s a guy that I’ve always had a tremendous amount of confidence in,” McVay said, adding, “The more that he plays and the more he’s available, the better he’s going to get.”

There is certainly plenty of truth to McVay’s comments as Henderson enters Week 4 as the team’s leading rusher with 201 yards on 5.7 yards per carry. He now appears to be primed for a lead-back role moving forward until Akers’ health improves.

The former third-round pick seemingly started the year as the odd-man-out in the backfield with Akers earning the start and Malcolm Brown stealing the show in Week 1 after rushing for two touchdowns and 79 yards on 18 carries, however, his lack of efficiency in recent weeks has only helped solidify Henderson’s new role.

The Rams have a much more favorable matchup going against a middling Giants’ defense. This could shape up to be another productive outing for Henderson and the offense.