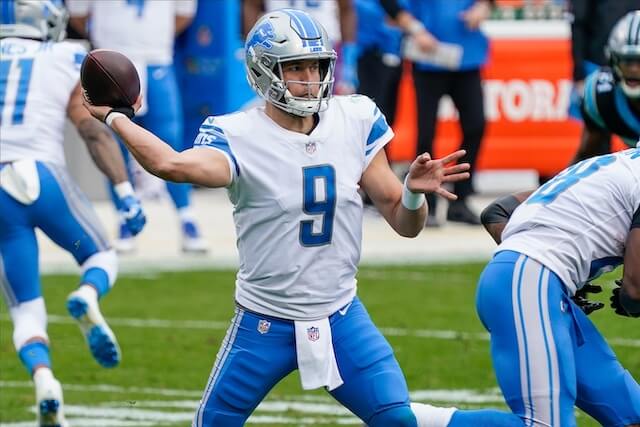 The Los Angeles Rams have emerged as one of the early favorites to contend for a Super Bowl in the 2021 NFL season following general manager Les Snead’s blockbuster acquisition of former Detroit Lions quarterback Matthew Stafford.

The Rams made quite an investment to bring Stafford over after parting ways with two first-round picks in 2022 and 2023, a 2021 third-round pick, along with quarterback Jared Goff. There has been speculation that this was a steep price to pay for a 33-year-old gunslinger that is still looking for his first career playoff win.

Furthermore, Stafford has just two years left on his current deal and could be slated to test free agency following the 2022 campaign. Despite some of the uncertainties, it appears Snead is rather optimistic about their long-term future under center.

Quarterbacks Like Tom Brady and Drew Brees managed to defy the effects of Father Time with some elite play down the final stretch of their careers. Snead said during an appearance on the 11 Personnel podcast that this is an encouraging sign Stafford still has plenty of gas left in the tank beyond the next two seasons:

“I don’t think we did it thinking two years,” Snead said. “Based on his age, you can legitimately think five to seven, eight years if you look at what Drew has done. I don’t know if we’re going to get into Tom Brady, right? Too many things going. But with quarterbacks of his pedigree, a lot of those guys have played into their late 30s, for sure. So that was definitely the vision with Matt.”

Snead’s comments are a strong indication that a potential extension is already in the works for Stafford. Considering what the Rams have already given up for him, it is only logical to ensure that the trade has an opportunity to pay some major dividends down the road.

Fortunately, the Rams have paid for the luxury of having some time to see how Stafford’s fit plays out since they can cut him after next season without taking on any dead money. Of course, it is safe to say that this will not be the case barring some unforeseen circumstance that causes them to part ways.

Stafford has already warmed up to the change of scenery this offseason with his praise for L.A. as a bona fide playoff competitor. He is admittedly excited to get to work with his new supporting cast under head coach Sean McVay and has already embraced the championship expectations that have come with his arrival.