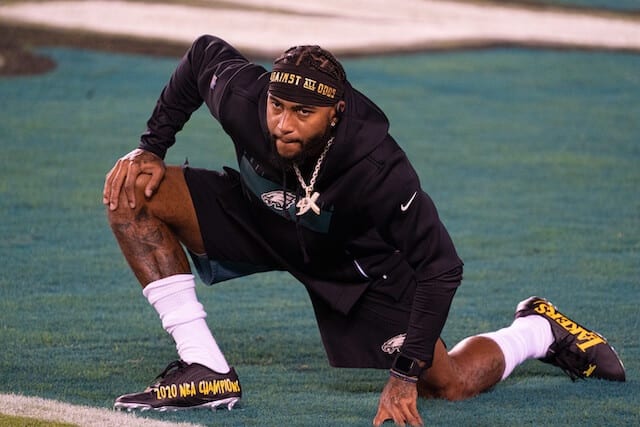 The Los Angeles Rams managed to shore up some serious firepower on the offensive wide of the ball this offseason with the additions of quarterback Matthew Stafford and wide receiver DeSean Jackson.

Both players are welcome additions to an offense that already boasts plenty of talent across the board under head coach Sean McVay. After all, the receiving corps is led by one of the NFL’s most productive tandems in Robert Woods and Cooper Kupp.

McVay has made it clear that there will be an emphasis on creating more explosive plays in the 2021 NFL season. Fortunately, they now seem to be well-equipped to do just that.

Jackson is slated to fill a void for the Rams as a true deep threat over the top. He is admittedly excited about being part of a new trio and feels they will be quite a handful to defend against moving forward, via the team’s official Twitter:

“Robert Woods and Cooper Kupp, those are two of the best doing it. Been doing it a long time. I’ve been watching, been fans of both of them and I’m glad to be an addition to them. For me, I just know how scary it is for those defensive coordinators and defenses to line up versus three Pro Bowl receivers. We’re doing it. Let’s go.”

Jackson’s comments are certainly understandable considering the numbers Woods and Kupp were already producing when Jared Goff under center. Adding both Stafford and Jackson to the mix should surely help to revamp this passing game for McVay.

Despite Jackson’s struggles with health in recent years, he is still more than capable of etching out an integral role for himself as the No. 3 receiver behind Woods and Kupp. His status as one of the most prolific speedsters in the league will open up the field for fellow teammates by forcing defenses to respect the deep pass.

Meanwhile, wide receiver Van Jefferson and tight end Tyler Higbee are also poised to emerge as go-to options for Stafford. Having no shortage of viable pass-catchers for the gunslinger to work with will surely pay some dividends for getting this offense back on track.

It is easy to see what attracted these veterans to the prospect of landing with the Rams given how well-equipped this roster is to contend for a Super Bowl in the 2021 NFL season. Although each player has enjoyed plenty of success in their respective careers, they are at the point where competing for a championship has become a top priority.