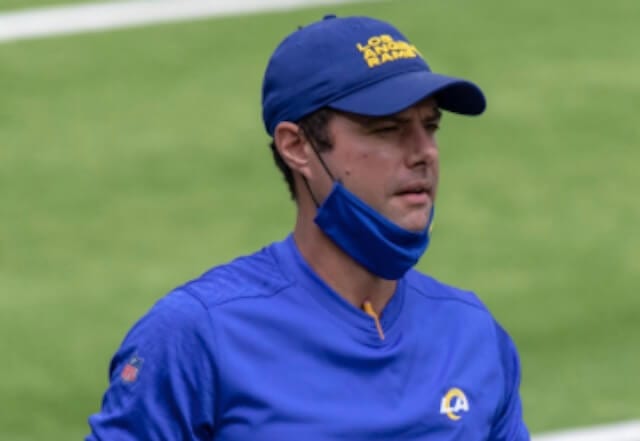 Brandon Staley had some big shoes to fill in his first and only year as the defensive coordinator for the Los Angeles Rams. Fortunately, the presence of defensive tackle Aaron Donald and cornerback Jalen Ramsey as foundational pieces helped ease the transition for him.

Although replacing Wade Phillips was certainly no easy task, Staley proved to be more than up to the challenge by putting together the No. 1-ranked defense in the NFL during the 2020 campaign. His success with the Rams subsequently earned him the head coaching gig across town with the L.A. Chargers.

There were plenty of factors that played into Staley’s meteoric rise to becoming a head coach. It seems his brief time working with Ramsey paid some of the biggest dividends.

Staley made it a point to get well-acquainted with the Rams’ star duo upon his arrival in L.A. last offseason. According to the MMQB’s Albert Breer, he credited Ramsey as one of the main reasons for his development as a coach and he plans on taking a similar approach with his new squad:

“I will remember it always, because Jalen is a big reason why I got this opportunity,” Staley said. “I mean, he’s one of the biggest reasons. He means so much to me. I remember that experience really shaping me. So when I came here to the Chargers, talking to my coaches, I shared that with them, because if this is the way it’s gotta be, we need to do this with our guys. We need to. We must. It’s incumbent upon us to do this.

“And that’s what we’ve been doing.”

Staley feels that taking the time to learn Ramsey’s traits was key in establishing a productive relationship:

“I learned a lot about him,” Staley said. “I learned that he loves to be coached. I love how intense he is about his game, how aware he is about his game. He’s not a defensive guy, he’s just a ball guy. I learned in that meeting that he wanted to play, and move around, and I felt he could—I studied his game a little bit from Florida State, and saw him do it, playing star, money, corner. I knew he could do everything. And that’s how I saw him, as a matchup guy that we could utilize to our advantage.

“But I learned in that conversation that he wanted to do that. Like, he wants to do that and showcase himself that way. It was an awesome conversation. I think more than anything it showed, Hey, my coach has really been looking at my game, and he’s got a plan for me.”

It is safe to say that Staley’s willingness to do his due diligence on key players was a major ingredient in the Rams forming the best defense in the league last season. This just goes to show the kind of impact that players of Ramsey’s caliber can make when they are genuinely comfortable in the system.

Staley’s efforts clearly worked for Donald as well after reclaiming his Defensive Player of the
Year crown for the third time in four seasons. He is now hoping his growth as a coach will help him replicate this success for a team that is looking to get in the playoff picture next season.

Much like their L.A. counterparts, the Chargers already feature plenty of talent for Staley to work with on the defensive side of the ball. This group is led by a premier edge rusher in Joey Bosa as well as a star-studded secondary between Chris Harris Jr. and Derwin James.