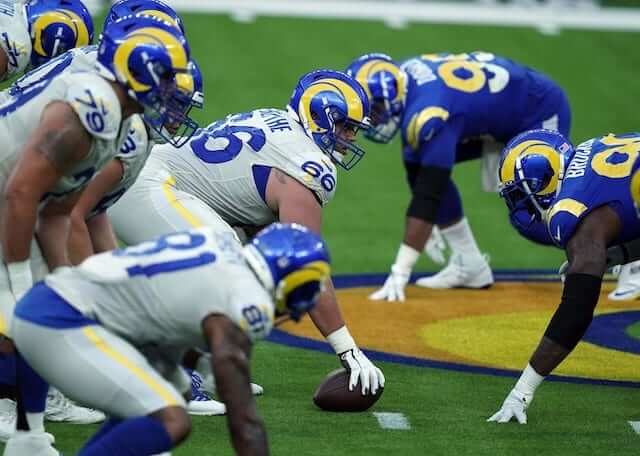 The Los Angeles Rams were dealt a crucial blow along the offensive line with the departure of center Austin Blythe in free agency to the Kansas City Chiefs.

Some turnover on both sides of the ball was to be expected given the team’s salary cap situation leading up to the start of the new league year. As a result, Blythe was among the notable losses after signing a one-year deal with a Chiefs’ front that started the offseason with some voids to fill of their own.

It is easy to see the intrigue for Blythe since he is likely poised to take snaps with quarterback Patrick Mahomes on a bonafide Super Bowl contender. However, it appears this was not the only perk that factored into his decision.

Although Blythe may have called Iowa home growing up, he was rooted in Chiefs fandom as a kid. He even revealed that his arrival in Kansas City will be a bit of a homecoming for him, via Charles Goldman of USA Today:

“I actually was born in Kansas City,” Blythe told reporters on Monday. “My parents moved up to Iowa shortly after I was born and then just continued to root for the Chiefs. So (I’m) kind of coming full circle here, being able to come play for the Chiefs. Obviously, I mentioned the team has been in a great spot, the last several years and I’m just really excited to get to work.”

Blythe added that he is ready to embrace any role that is expected of him in the 2021 NFL season:

“My mindset is, I just wanted to be here,” Blythe said. “Coming in to play for a great organization, a great team and coming in and playing offensive line. Wherever my piece may fit that’s what we’re going to do.”

Blythe’s comments show that the prospect of signing with a Chiefs team fresh off consecutive Super Bowl appearances was too good to pass up. Getting back to his family roots as part of a revamped offensive line was just the icing on the cake.

Kansas City opted to go with a new look up front following this groups’ abysmal outing in Super Bowl LIV. They managed to make a splash with the additions of Joe Thuney and Kyle Long in free agency.

Blythe seemingly finds himself in an ideal position to begin the next chapter of his career. It will be interesting to see if he is able to take advantage of the opportunity by making his return a long-term one.