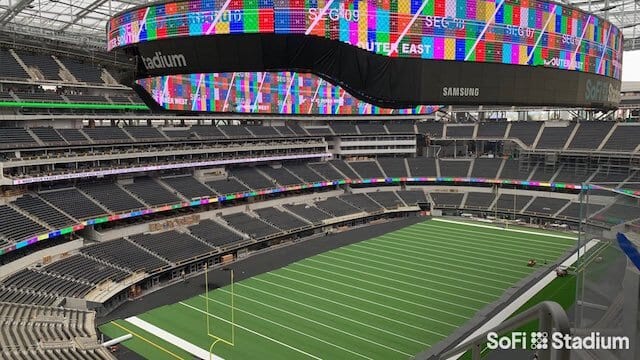 The 2020 season was supposed to be a special one for the Los Angeles Rams, beginning a new era at the state-of-the-art SoFi Stadium in Inglewood.

While the stadium will still be ready by the start of the preseason when the Rams host the New Orleans Saints in Week 1, the game will likely take place with no fans in attendance due to the coronavirus (COVID-19) pandemic.

The NFL is giving teams the ability to decide if they can have fans at their stadium based on local regulations in place. As cases continue to grow in L.A. county though, the Rams don’t seem to expect to be having fans at SoFi Stadium in 2020.

“While we continue to plan to play Rams games at SoFi Stadium this season, the likelihood of being allowed to play in front of a sold-out crowd of cheering fans seems low at this point,” the Rams wrote in a letter to season ticket holders.

“We are contingency planning around a number of different capacity scenarios in the event that all Season Ticket Members will not be able to attend all home games in their seats.”

It is good to see that the Rams are being up front with their season ticket holders, who will be paying a ton of money for their seats at the new stadium.

While it is unfortunate that fans likely won’t be in attendance for the 2020 season, it is probably the correct decision as health and safety of players and fans remain the most important thing during this time.

The Rams can still give their fans a good season though by getting back to the playoffs. They underwent a ton of roster turnover this offseason, but L.A. is still expected to be in the mix in a tough NFC West division.

The post Rams Believe Likelihood Of Playing Games In Front Of Sold-Out Crowd At SoFi Stadium In 2020 Is Low appeared first on Rams Newswire.