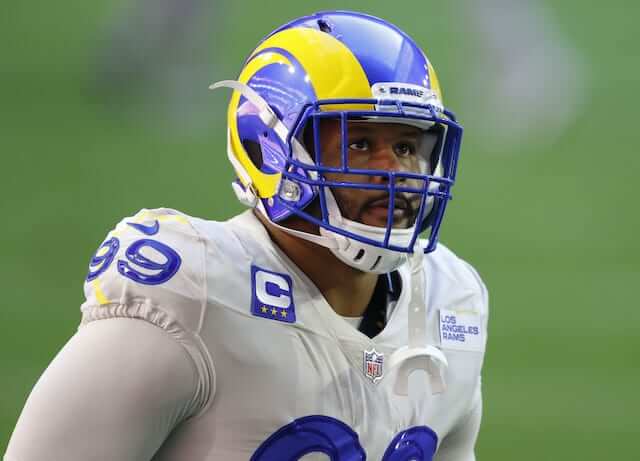 Los Angeles Rams star Aaron Donald may have found himself in a bit of trouble after a man filed assault charges against him after a scuffle in his hometown of Pittsburgh.

The Rams released a statement after finding out about the incident, saying they were looking into the matter and would give further comment when appropriate.

Donald is known to be one of the strongest and most feared men in the NFL, but he is also very smart, so something didn’t seem right about him risking his career getting in a bar fight.

Things are starting to make more sense now though as Donald’s lawyer, Casey White, says there is video evidence refuting the assault claims, per Lindsey Thiry of ESPN:

“As he ducks, somebody from behind grabs him to stop him from interacting with this guy, Mr. Spriggs, so he holds Aaron back in a sense,” White said. “At that point, that’s when other people come to Aaron’s aid and defend him by removing, so to speak, Mr. Spriggs from the area where he is punched and he is fighting; it’s a mutual fight at this point between other individuals who Aaron does not really know.”

White added that Donald was actually trying to deescalate the situation before his friend pulled him away entirely:

“Aaron actually runs over to [Spriggs’] aid and starts pulling people off of this guy,” White said. “He’s trying to get these kids off Spriggs; he gets at least two or three people off of Spriggs and at that point in time, somebody grabs Aaron and says, ‘This is not a good situation, let’s get the heck out of here.’”

The video evidence seems to support what White is saying, via Cara Sapida of WPXI:

EXCLUSIVE VIDEO: Surveillance video appears to show #NFL star Aaron Donald run over and try to break up assault. I just talked to Donald’s lawyer who says his client came to the rescue. #WPXI pic.twitter.com/0sXKjrMJs9

If Donald is charged with assault, then he likely would face discipline from the NFL as well. With this newfound evidence though, it seems unlikely that Donald will be charged for anything, which is great news for him and the Rams.