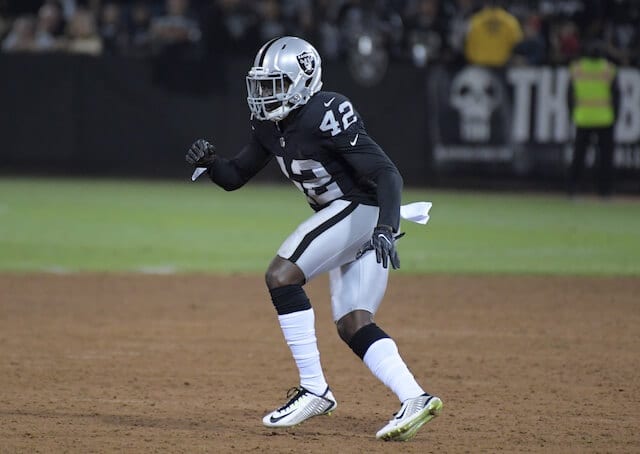 According to a press release sent out by the Las Vegas Raiders on Friday, safety Karl Joseph is officially returning to the team after spending one season with the Cleveland Browns.

Joseph spent his first four seasons in the NFL with the then-Oakland Raiders. He was drafted out of West Virginia University with the 14th overall pick in the 2016 NFL Draft by the Raiders, where he started in 41 of the 49 games he played for the Silver and Black.

The 27-year-old admits he never wanted to leave the Raiders during his introductory press conference on Friday.

“Well, first off, I never wanted to leave,” Joseph said. “I think this is my home. I was drafted here. I feel like I was born to be a Raider, so came and got the opportunity to, spoke to [Head] Coach [Jon] Gruden and I knew I had to come take a visit and sit down and talk to him. And we spoke for a while yesterday and it felt right. I took some time to think it over and talk to my family about it and it just felt right. It felt like the right decision to come back and help finish what I started here and be a part of that and come do whatever I can to help the team win.”

The Raiders have been trying to address the defensive side of the football this NFL offseason after failing to live up to expectations during the 2020 campaign. They also brought in some key offensive weapons in John Brown, Willie Snead and Kenyan Drake, but their real issues were defensively.

Joseph will give the Raiders some depth at the safety position as well as the secondary in general. Although he wasn’t one of the top-tier players on the market, Joseph is a welcome addition and player that could potentially pay dividends for a team that desperately needs a boost on defense in 2021.

Last season, Joseph finished the 2020 campaign with the Browns with an interception, 46 solo tackles and two fumbles recovered.