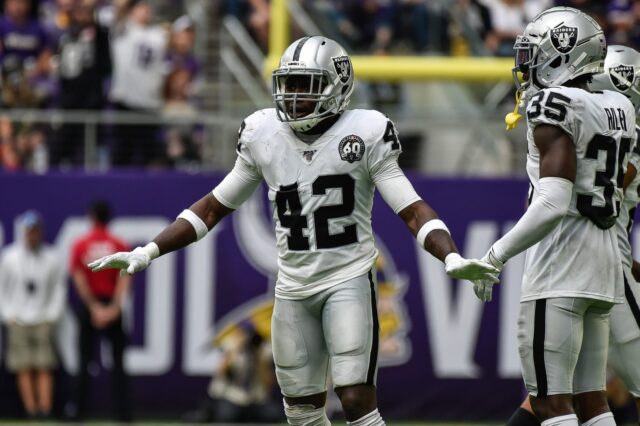 It is no secret that the Las Vegas Raiders have some notable voids to fill in the secondary this offseason.

The Raiders have met with a number of defensive backs in an effort to shore up some much-needed depth over the top of their defense. It appears they are doing their due diligence on all their options– including ones they have already parted ways with.

Safety Karl Joseph is among the notable free agents still available following a brief stint with the Cleveland Browns. There seems to be a chance that a potential reunion could be in the works.

According to NFL Network Insider Ian Rapoport, the Raiders met with a familiar face in Joseph at their facility.

A blast from the past: Former #Raiders first-round pick safety Karl Joseph is visiting with the #Raiders right now, source said. A possible secondary addition.

Joseph’s reputation as a hard-hitting safety out of West Virginia made him one of the most intriguing prospects in the 2016 NFL Draft. The Raiders went ahead and pulled the trigger by taking him with the 14th overall pick during the previous regime under Jack Del Rio with the hope that he could revamp the secondary.

The arrival of new head coach Jon Gruden led to plenty of uncertainty regarding his future with the team. They eventually solidified this notion by declining his fifth-year option. He subsequently signed a one-year deal in free agency with Cleveland and finished the 2020 campaign with 67 tackles, one interception and four pass deflections while starting in eight games.

Joseph’s experience as a start could help pay some major dividends for this young, unproven secondary. His versatile skill set as a hybrid linebacker/strong safety will also allow new defensive coordinator Gus Bradley to plug him in anywhere he deems fit.

Although Joseph’s first stint with the Raiders may have come to an unceremonious end, it will be interesting to see if the year apart has helped both sides come to a mutual understanding.