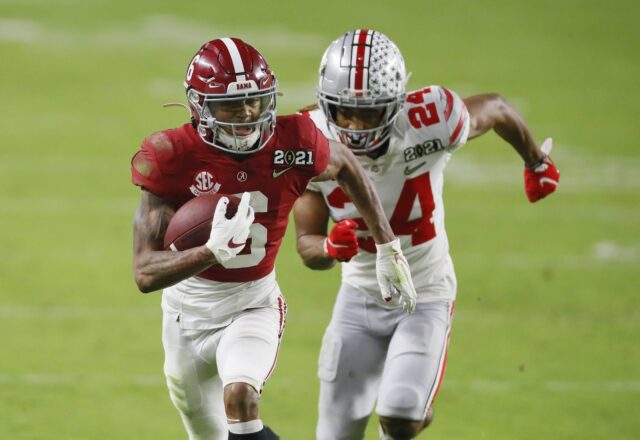 With the 2021 NFL Draft just around the corner, the Las Vegas Raiders have a good idea of the notable voids still left on their roster. This includes filling the holes left along the offensive line as well as the defensive side of the ball.

After all, the Raiders invested some serious draft capital last year to revamp the receiving corps with young talent. They ultimately opted to make Henry Ruggs the first wideout off the board before taking Bryan Edwards in the third round.

Unfortunately, this group fell vastly short of expectations during a disappointing 2020 campaign. As a result, they could be looking to make yet another splash for their passing game.

Despite his impressive resume, Alabama wide receiver DeVonta Smith has seemingly been pegged as the biggest high-risk, high-reward player in his class.
Josh Edwards of CBS Sports feels this uncertainty could lead to Smith dropping down to the Raiders with the No. 17 pick.

“Smith should not be on the board at this stage of the first round but some really good players are going to slide. Teams may overthink his lack of size but Smith creates separation as well as anyone.”

Smith is coming off one of the most impressive individual seasons for a wideout in recent history with 117 receptions for 1,856 yards and 23 touchdowns. His efforts paved the way for a second National Championship and the Heisman Trophy.

Although there has been plenty of speculation regarding where Smith will land in the upcoming draft, the prospect of him sliding this low certainly seems far-fetched. Regardless, having an opportunity to reunite him with Ruggs would be too good to pass up.

Head coach Jon Gruden was not shy about pointing out the underwhelming performance from key members of the receiving corps. Adding Smith to the mix could provide a much-needed spark for quarterback Derek Carr in the passing game.

Even if Smith is no longer available at No. 17, Las Vegas may still find themselves in a win-win situation since it would allow them to address the voids on the offensive line or defense early on. The offense is still in need of a right tackle, and general manager Mike Mayock has noted the defense’s need for playmakers at each level.