Home Raiders News: Allegiant Stadium Will Be At Full Capacity For 2021 NFL Season

Raiders News: Allegiant Stadium Will Be At Full Capacity For 2021 NFL Season 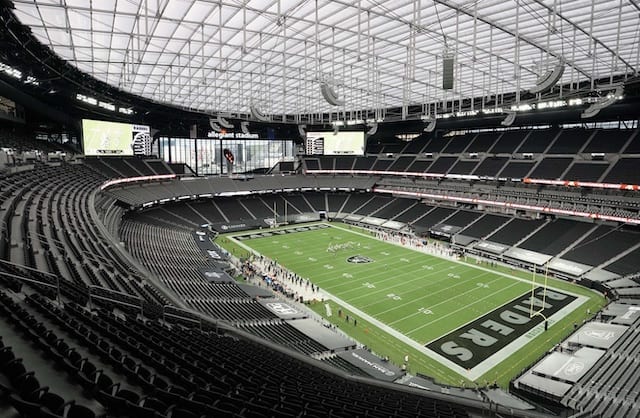 The Las Vegas Raiders officially ushered in a new era for their franchise after playing the 2020 NFL season at Allegiant Stadium to solidify their relocation.

Unfortunately, their arrival had been spoiled by the restrictions of the coronavirus (COVID-19) pandemic. Not only was the 2020 NFL Draft that was supposed to be held in Las Vegas reduced to a virtual event, fans were not yet allowed to watch the team play in their new home just off the strip.

The NFL still has plenty of time to prepare for the prospect of allowing fans in stadiums for the 2021 NFL season. It appears Las Vegas has wasted no time in announcing its plans to make it come to fruition.

CEO and President of MGM Resorts International Bill Hornbuckle announced that Allegiant Stadium will be at full capacity this upcoming season via Kevaney Martin of 8NewsNow.

“The @Raiders Stadium will be at full capacity in the fall.” – Bill Hornbuckle, CEO and President, MGM Resorts International

That has to be music to #RaiderNation ‘s ears

Team owner Mark Davis notably opted to wait until stadiums were allowed to operate at full capacity before allowing fans back to truly savor the experience. Fortunately, the comments made by Hornbuckle and commissioner Roger Goodell have now helped solidify this notion.

Meanwhile, Major League Baseball’s Texas Rangers made headlines by operating at full capacity starting in April. This should help give the Raiders a blueprint to emulate as they get set to welcome fans in their stadium for the first time.

Like SoFi Stadium in Inglewood, the 2021 campaign is not the only major event scheduled to take place at the new venue. Should Allegiant get approval, then it will play host to a Garth Brooks concert on July 10th.

The Pro Bowl is also slated to take place in Las Vegas at some point in 2022 once the regular season concludes. Although the Raiders are surely looking forward to showing off their star power, they have made it clear that there are championship expectations.

The post Raiders News: Allegiant Stadium Will Be At Full Capacity For 2021 NFL Season appeared first on Raiders Newswire.